REMOTE SENSING OF ÇATALHÖYÜK PAST LANDSCAPES

Introduction – Çatalhöyük, one of the most important archaeological sites in the world. Since the 1960s, excavations have uncovered a densely packed Neolithic settlement which dates back 9000 years. In the past sixty years archaeological research focused mostly on two mounds: the smaller and more recent to the west of the site and the larger and more ancient to the east. However, scratch beneath the surface and the remnants of one of the most complicated societies of its time are revealed. However, very few activities have been implemented to the understanding of the landscape around the site.

The investigation of the landscape of Çatalhöyük has been a fruitful source of information since the beginning of the KOPAL project in the 1990s (Roberts et al. 1996, 1999, 2007) and the more recent geoarchaeological campaign (Ayala et al., 2017, 2022; Ayala and Wainwright, 2020; Wainwright and Ayala 2021). It makes it possible to recognize land-use models and put up the spatial and temporal evolution of the occupation of the site in its broader environmental context. The prerequisite condition of this research is the integration of interdisciplinary approaches.

An important aspect of the current Konya Çatalhöyük Project led by Doç. Dr. Ali Umut Türkcan is mapping and sediment sampling of the area immediately around East and West Mounds at Çatalhöyük to refine the key phases of the development of the site and its immediate landscape, in particular its riverscape. This interdisciplinary project is co-designed by archaeologists, landscape archaeologists, geoarchaeologists, geomorphologists and digital archaeologists/geospatial analysts in order to target a single holistic question. The project takes advantage of the innovative use and integration of the non-invasive and non-destructive methods to respond to key archaeological questions raised by ongoing excavations on the site. This new programme of research makes it possible to effectively capitalize on new technologies and approaches employing a holistic approach.  These goals will be achieved by the application of topographical investigation, geophysical survey and drone survey in the vicinity of the settlement.

In the past, therefore, research has been carried out on the whole site of Çatalhöyük and in the immediate surroundings but never has a real landscape analysis project been implemented aimed at understanding of the transformation within the neolithic time framework of settlement patterns, infrastructural and environmental characteristics (e.g.: Konya Regional Archaeological Survey Project was focused on Bronze and Iron Ages; Massa et al 2020 and Osborne et al 2020).

We believe it is important to underline that the methodology proposed to carry out this project has already been successfully applied to Çatalhöyük in the past years (Forte et al 2019; Strutt et al 2020).

Aim – The aim of this research programme is to expand the goals of Konya Çatalhöyük Project by addressing the longue durée of the transformation of the environmental framework of the Çatalhöyük settlement patterns. In particular, it aims at extending the recognition of the Neolithic landscape beyond its immediate surrounding of the settlement at Çatalhöyük.

It would make it possible to put it up in the broader regional context and reveal its different constituent elements, such as the character of the Çarsamba riverbed, location of field systems, road systems and settlement patterns. An integrative approach will be developed to drawn on a wide range of spatially extensive datasets to outline meaningful trends in settlement, water management and regional defensive systems during the neolithic.

Methodology – Based on past and particularly recent experience the key research methods for gathering the essential source evidence in a landscape context are likely to include field-walking survey and artefact collection, aerial photography and lidar imaging, open-area geophysical prospection (as an analogy with ‘open-area excavation’), geo- and bioarchaeology, and targeted small-scale excavation. None of this, of course, excludes a continuing reliance on a range of information sources traditionally associated with landscape investigation: documentary and literary analysis, the existing archaeological literature, place-name studies, iconography, epigraphy, the evidence of historical maps and the often-under-valued significance of ‘local knowledge’.

In the remote sensing of past Çatalhöyük landscape projects we would implement a multi-scale research strategy based on the analysis of:

Through the detailed analysis of satellite imagery but above all by historical air photo coverage and historical maps it would be possible to recover over an area of about 650 km2 (Fig.1), in part at least, the existence, location and inter-relationship of settlements and other human-made or natural features across large parts of the Konya Plain landscape, including many important elements that have in the days since the photographs were taken been wholly or partially erased by the ravages of war or the depredations of post-war developments and infrastructure projects. 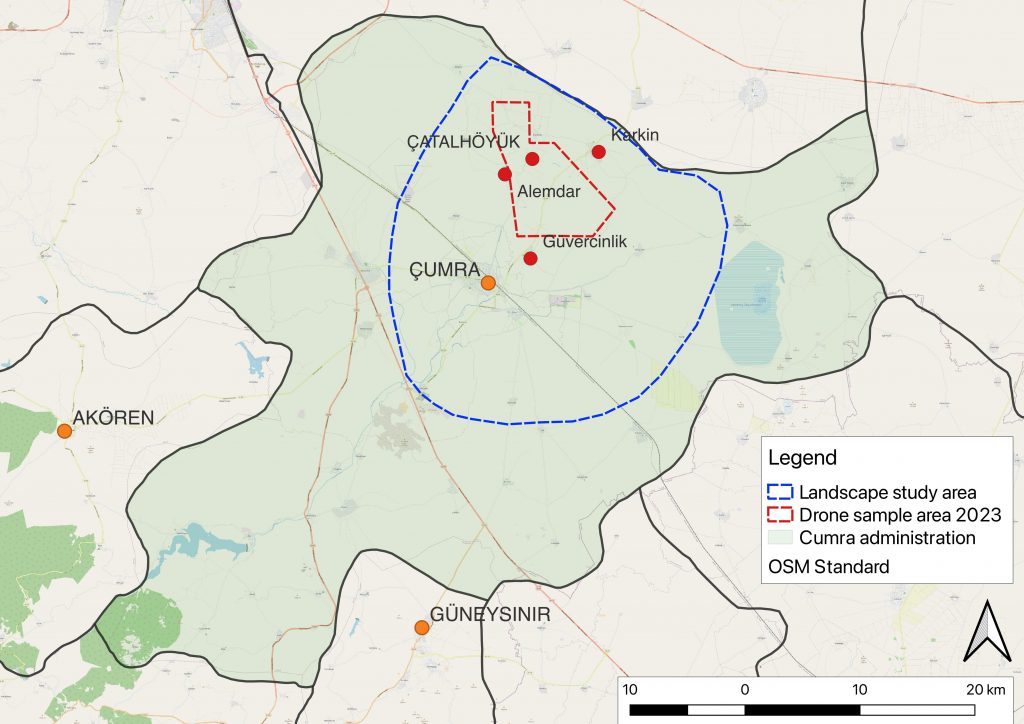 Although drones of various kinds have been available for less than a decade at the time of writing, archaeologists and applied scientists have already identified several archaeological applications, including air photography, in which aerial platforms of this kind could play an important and innovative role (Campana 2017; Green et al 2021). The scale of photographic coverage achieved by micro-drone systems has always been somewhat problematic – relatively restricted in comparison with traditional air photography or aerial photogrammetry but comparatively large by contrast with ground-based systems such as total station survey, terrestrial laser scanning or the use of devices such as photographic towers, poles or masts, and kites or balloons, or global navigation satellite system (GNSS). Both in principle and in practice drones of various sizes offer a long-desired opportunity to fill a gap in the effective range and detail of low-altitude photography, with a flying altitude of between 20 and 100 m and the capacity to acquire data for landscape areas ranging from less than a hectare to as much as 600 ha (6 km2) per day, sufficient for coverage of a ‘local scale’ sample within 5 up to 10 working days (Fig.1).

The main novelties of drone survey, compared with traditional aerial reconnaissance based on the use of light aircraft (Musson et al 2013), are enhanced by cost-effectiveness, higher resolution, unprecedented opportunities to acquire data in a wide range of differing environmental settings and field conditions (of lighting, seasonality, land use, morphology etc) and do so at a ‘new’ scale of detail, filling a real gap in the previous methodological workflow (Campana 2018). Why seasonality is so important for aerial archaeology? As it is widely known in the archaeological literature (Campana 2016), to identify buried archaeology, it is necessary to know the phenological cycles of cultivated plants and to identify the moment or moments in which the influence of the archaeology in the subsoil on the overlying plants is most visible. For example, in the case of the territory around Çatalhöyük characterized by a markedly agricultural land use, the best time ever to have the opportunity to observe the presence of cropmarks are the two main stages of ripening of the prevailing cultivation patterns (wheat and corn) and therefore late May and early of September. Why do we need drones instead of light aircrafts? Drones are the only vehicle that allow us to carry out reconnaissance independently, at the most suitable time and at low cost.

Topographical mapping and archaeological survey have introduced new opportunities for the exploration of previously unrecorded archaeological features preserved beneath the woodland canopy but also over naked soil. To improve results and reduce costs in Çatalhöyük photogrammetry survey will be applied.

Traditional aerial photography, using optical sensors operating within the visible electromagnetic spectrum, has among its main limitations the need to work within fairly short time windows, combined with the inability to control all (or any) of the variables that determine success or failure: geology, pedology, micro-climate, agricultural patterns, farming practices and historical landscape development etc. As already noted, archaeologists have long been conscious of their inability to control the conditioning factors that influence the visibility or invisibility of archaeological features buried beneath the soil. As a result, the discovery of archaeological traces through aerial photography is to a significant extent subject to the incidence of chance and serendipity.

An important contribution to expanding the current time windows and reducing the effect of serendipity on the outcome of aerial reconnaissance (thereby strengthening the diagnostic potential of the photography) could come from the measurement and analysis of non-visible portions of the electromagnetic spectrum. Drone systems applied in the project offer the possibility of equipping aerial platforms not only with optical systems operating in the visible range but also with sensors collecting data within the non-visible parts of the spectrum (Forte et al 2022).

MUSSON C., PALMER R., CAMPANA S., 2013, Flights into The Past. Aerial photography, photo interpretation and mapping for archaeology, Occasional Publication No. 4 of the Aerial Archaeology Research Group in partnership with the ArchaeoLandscapes Europe (ArcLand) Project of the European Union.